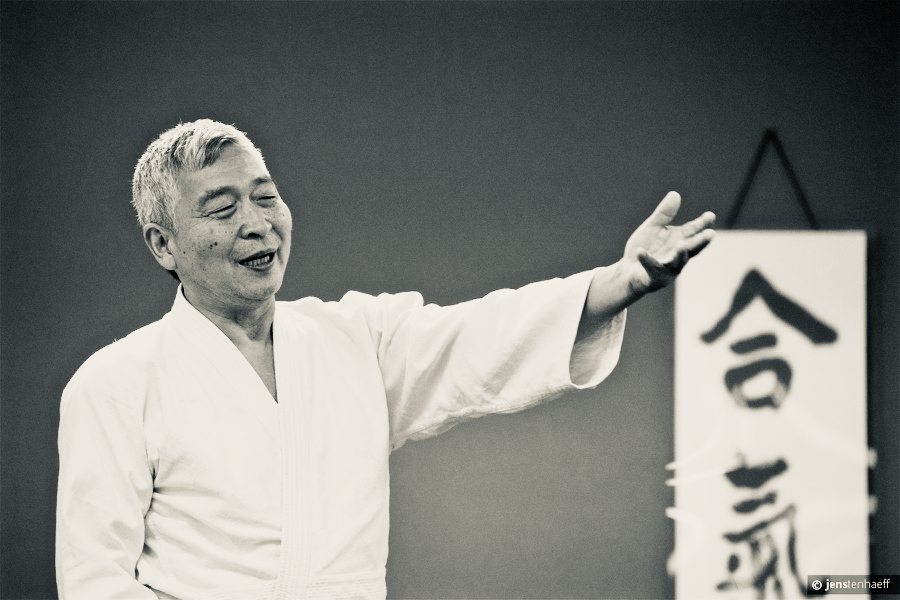 Now many places are opening so it again is possible to do Aikido in the dojo.

Hope you and your dogi are ready!

Check you local dojo and bring your friends.

Soon there will also be seminars again.

Below you can see dates for seminars in Ähtäri, Finland & Crissolo, Italy & I am sure more will follow.

You can always see the latest on the seminar page here..

Big congratulation to Phillip Burgess (UK) and Maurizio Volpe (Italy) with their promotion to Kudan.

They both got got Diplomas from Japan, something Doshu set in motion in 2020.

Below you can read an article on the Aikido life of Phillip Burgess.

Another congratulation goes to Rainer Varis (Finland) with his 50 years anniversary.

In the last section with memories there is a small text on his aikido life and a nice video made for Finnish national television in 1993.

Ki no Kenkyukai Valencia made a beautiful ceremony for Doshu, combined with handing over the latest diplomas.

See the video below.

Ki News is a newsletter for all Aikido students of Ki no Kenkyukai Internationale.

If you want to receive a mail when it is published or if you want to contribute to the Ki News, contact via mail, ki-newsletter@toitsu.dk

By Jayesh Karadia and Mike Hayes,

Shihan Philip Burgess, Chief Instructor of the British Ki Society, was promoted to 9th Dan this year by Doshu Yoshigasaki before he passed away.

Shihan Burgess began practising Aikido in 1967. He says “In those days Aikido clubs were few and far between. There was a good feeling in the club that I liked so I started training. It was Aikido as a form of self-defence.”

In 1970, the year he received his Shodan, he attended a seminar given by Tamura Sensei and realised that something had been missing from his practice. “In the Coventry area there was only one Aikido club and books on the subject were almost non-existent. For people starting Aikido there was nothing to compare with, so one assumed that all Aikido was the same:

A Japanese martial art.” Sensei Burgess recalls how Tamura Sensei could execute techniques with ease to the young black belts who in return found him immovable. Tamura Sensei explained the difference in their abilities was down to their application of Ki.

Sensei Burgess learnt that Tamura Sensei was a student of Koichi Tohei Sensei, who taught him this application of Ki.  In 1972 Tohei Sensei resigned from the Aikikai in l972 and started teaching Shin Shin Toitsu Aikido or the art of Aikido with mind and body coordinated. Sensei Ken Williams, one of the original practitioners of Aikido in the UK, was the official representative of the Ki No Kenkyukai.

In 1978, Tohei Sensei visited the UK and gave a two-week course in Wales. His Omoto on this course was Yoshigasaki Sensei. Sensei Burgess wondered whether the stories surrounding Tohei Sensei’s ability were true and decided that this was his best opportunity to test Tohei Sensei first hand. As a young man in his twenties he volunteered, at the first chance, to take Ukemi. Despite Sensei Burgess’s best efforts, Tohei Sensei threw him with ease. Tohei Sensei himself seemed to relish his sincere attacks and continued to use him as a uke for the next two weeks.

Sensei Burgess says “Using the technique “Ukemi’ allows you protect your body by taking an efficient and safe fall when thrown without losing mind and body co-ordination. A deeper understanding of ukemi is “receiving something through your body.” If nage is calm relaxed and

unified the uke understands calmness and relaxation. Making ukemi for Tohei Sensei was a privilege.”

Yoshigasaki Sensei began visiting the United Kingdom four times a year and Sensei Burgess made a point of not missing a seminar, eventually gaining a 5th Dan in Aikido and Okuden in Ki from Tohei Sensei.

After Tohei Sensei’s retirement in 2002, most of the clubs in Europe, including the British Ki Society, left the Ki No Kenkyukai and decided to follow Doshu Yoshigasaki’s newly formed Ki No Kenkyukai Association Internationale.

One of the aims of Aikido is to develop a non-fighting mind. Sensei Burgess explains: “Life is full of challenging situations. It is up to us to decide the spirit in which we respond to them. When training in the dojo one can look upon each exchange of techniques as challenges which we learn to respond to calmly. In the dojo a ‘non-fighting mind’ is one in which we neither resist our partner nor comply with them. Our aim is to make harmonious movements without trying to defeat or manipulate nage. In daily life, where training is truly tested, a non-fighting mind does not judge others and does not seek power. It is an attitude of nonaggression that brings calmness in difficult or dangerous situations. Seeking a non-fighting mind is seeking to make yourself a better human being. Aikido is not about what you do but what you are.”

In memory of Yoshigasaki Sensei

A few months after the death of Yoshigasaki sensei we felt the need to make an act in his memory and talk about his intense legacy that will remain in the KnK València group.

We wanted to express this memory with the joy of having known him, to value his teachings, to celebrate the 32 uninterrupted years in which he came to our city, as well as to other nearby places to impart his excellent and interesting teachings that have marked us so much.

Also, the public delivery of the last diplomas of the last exams that Sensei took in Valencia.

I think many will recognise many of the stories Jan are telling in one form or another.

In the next issue of Ki News it will present it in translated versions.

Until then you can read the English version on  Jan's Aikido site:

If you want to share you story, please sent it on mail to:

Online or in Dojo?

Some dojos now stopped doing Aikido online as it many places now is possible to practice in Dojo again!

Aikido at high altitude (1400 meters above sea level) between the peaks of the Alps at the foot of Mount Monviso,long walks surrounded by nature, clean air and homemade food.

Links to posters (in English):

Rainer Varis (b. 1955) started practicing aikido and iaido in 1971 with Toshikazu Ichimura, who back then was the teacher responsible for aikido in Sweden, Denmark and Finland.

In 1974 Varis was the first black belt in Finland, and served as the Finnish head teacher of Finland Aikikai until leaving the organisation in 1977. After that he went to Koichi Tohei's seminars in Brussels, and started studying ki-aikido with Degueldre and Yoshigasaki.

Click on the picture below to see video from 1993 in the Finnish national television!

Click on the picture above to see video from 1993 in the Finnish national television!

Through my fifty years of teaching aikido, I found the most important thing is love and respect.

If you are following me, you follow the way of love and respect.